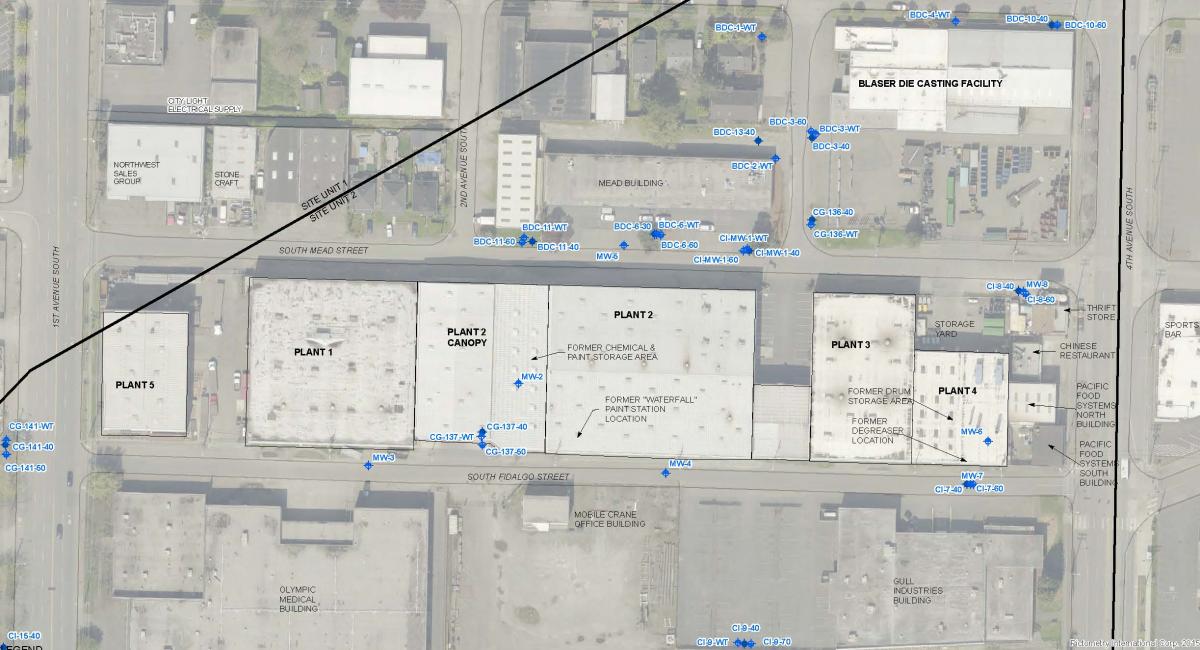 Former operations at Capital resulted in releases of the chlorinated solvent trichloroethene (TCE) at Plant 2 and TCE with the chlorinated solvent tetrachloroethene (PCE) at Plant 4. TCE, PCE, and their degradation products are collectively referred to as chlorinated volatile organic compounds (CVOCs). These releases have affected soil and groundwater at Capital and groundwater down-gradient (south/southwest) of Plant 2 and Plant 4.

The nature and extent of CVOCs in soil and groundwater at Plant 4, which is the plant furthest to the east, suggest that a release(s) of TCE and/or PCE may have occurred from degreasing operations and drum storage. The Remedial Investigation work did not detect residual concentrations of CVOCs in soil that suggested an extensive or significant release of CVOCs at Plant 2 or the Plant 2 Canopy. Nevertheless, groundwater data indicate a minor source of CVOCs is likely present. Soil beneath Plant 2 was excavated for the foundation and utility trenches for reconstruction of Plant 2 in 2004 following the destruction of the building by a fire.

Sufficient sampling was performed during the Remedial Investigation phase of work to estimate the distribution of CVOCs in the affected media. All Remedial Investigation work was completed by 2014. In April 2014 Capital entered into a second Agreed Order with other Potentially Liable Persons (PLPs) with co-mingling sources of CVOCs to complete a joint Feasibility Study and Cleanup Action Plan. This group of PLPs now comprise the West of 4th Site, which has a website where interested parties may view the project progress under the new Agreed Order. The new Agreed Order is also available for viewing and download below.

The Feasibility Study work will continue through 2019 and will involve pilot testing of potential cleanup technologies. Capital is testing cleanup technologies that may be applied as an interim action at Plant 4 to address the minor release of PCE and TCE that is affecting groundwater and represents a potential risk to indoor air quality in the northernmost building at the east-adjacent Pacific Food Systems property. A vapor intrusion mitigation system is operating at the Pacific Food Systems north building to mitigate TCE in indoor air. A second vapor intrusion mitigation system currently operates at the Natus Medical building located southwest of Plant 2. This vapor intrusion mitigation system was installed to mitigate potential indoor air impacts associated with a commingled TCE plume originating from Plant 2 and the Blaser Die Casting facility located immediately northeast of Plant 2.

Updates regarding ongoing and planned work activities for Capital are included below in the quarterly progress reports provided to the Washington State Department of Ecology. Details regarding activities for the other PLPs are found on the West of 4th Site web page referenced above.

Remedial Investigation Work By Others

Farallon Consulting and our team of experts are active members of professional associations.